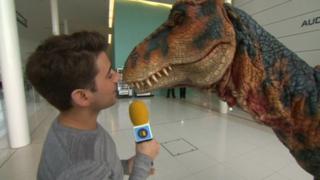 Ever wondered what it would be like to walk with a dinosaur?

Well, Ricky's been to meet one fearsome cast member from the live show Walking with Dinosaurs - The Arena Spectacular, which is based on the hit BBC TV series of the same name.

Designers and scientists have worked together to create 20 life-size dinosaur models that move and look like the real thing!

The show started in Australia back in 2007 and has toured the world.

It's back in the UK from 26 December.

Check out the video above to see why it might have been one of the trickiest interviews Ricky's ever done!