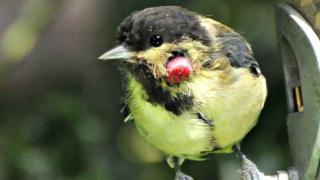 A virus which can kill great tits was brought to the UK by insects, reckon scientists.

The disease was first found in south-east England in 2006 but moved quickly to other parts of the country.

It causes large growths on birds' beaks and eyes which can make them very sick.

The virus is a form of avian pox - a skin disease which cannot be caught by humans.

Scientists think the pox came from Europe and was probably carried across the Channel by biting insects, such as mosquitoes.

However, they say that some tits are able to recover from infection, and that although the disease may continue to spread, it might not have a big effect on numbers.

Because the disease can spread between birds, experts recommend that people keep their feeding stations and feeders clean.