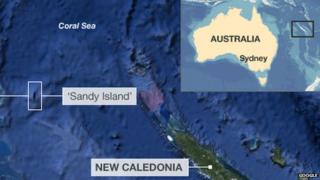 A small island thought to be in the Pacific Ocean has never actually existed, say Australian scientists.

Sandy Island had been shown on maps and sites like Google Earth for years.

A team of explorers from the University of Sydney went to find the island - but could only find blue sea!

Scientist Maria Seton said: "How did it find its way onto the maps? We just don't know, but we plan to follow up and find out."

One idea is that it was a human mistake that's been copied over time.