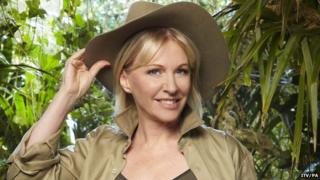 I'm A Celebrity viewers have voted off the MP Nadine Dorries.

The Conservative politician caused a stir by taking time off work to join the jungle TV show in Australia.

Before she went in, she said she wanted to raise awareness of issues she cared about.

She told hosts Ant and Dec: "I don't know what people have seen but I have had some fascinating conversations in there. It's been a fascinating experience."

She predicted boxer David Haye to win and said she "kind of expected" to be evicted first.

During Dorries' time in the jungle, she chomped on delights such as camel toe and ostrich anus.

She didn't tell the Prime Minister she was appearing on the programme and her political party suspended her.