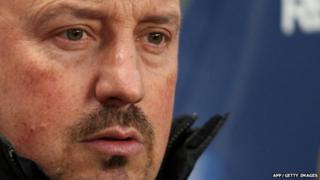 Ex-Liverpool boss Rafa Benitez has been named as the new Chelsea manager until the end of the season.

Roberto di Matteo was sacked by the club on Wednesday after their 3-0 Champions League defeat to Juventus.

Chelsea said on Benitez: "We have a manager with significant experience at the highest level of football who can come in and immediately help deliver our objectives."

He was in charge of Liverpool when they won the Champions League in 2005.

He's been out of work since he was sacked by Inter Milan in 2010.