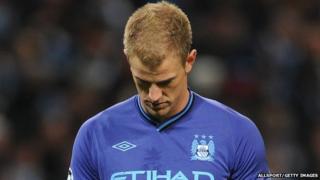 Manchester City have been knocked out of the Champions League, after drawing 1-1 with Real Madrid.

It's the second year running that City have been booted out at the group stage.

Karim Benzema scored an early goal for Real Madrid, while City's Sergio Aguero equalised with a second half penalty.

The Premier League champions needed a victory at the Etihad Stadium to keep alive their hopes of making it to the final 16.

Elsewhere, Arsenal have qualified for the final 16 after a 2-0 victory at home over Montpellier.

Jack Wilshere and Lukas Podolski scored the two goals for the Gunners.