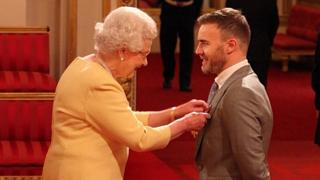 Gary Barlow has been given a special award by the Queen, called an OBE (Order of the British Empire).

The X Factor judge and singing sensation collected his honour on Wednesday at a ceremony at Buckingham Palace.

He was given his award to recognise all the good work he's done over the past few years for British music and for charity, like organising a celebrity trip up Mount Kilimanjaro in Africa, and a big concert for Children in Need last year.

The Take That band member also organised and performed in the Queen's Diamond Jubilee concert earlier in the year.