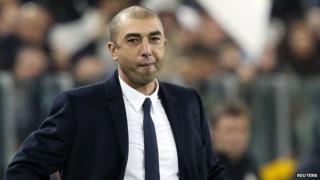 Chelsea manager Roberto di Matteo has been sacked by the club.

The Blues said in a statement on Wednesday morning: "The team's recent performances and results have not been good enough.

"The owner and the board felt that a change was necessary now to keep the club moving in the right direction as we head into a vitally important part of the season."

Chelsea lost 3-0 to Juventus in the Champions League on Tuesday night.

The defeat leaves them on the verge of crashing out at the group stage.

Chelsea's statement continued: "The owner and the board would like to thank Roberto for all he has done for the club since taking over in March.

"Roberto helped guide us to an historic Champions League victory and a seventh FA Cup. We will never forget the huge contribution he has made to this club's history and he will always be welcome at Stamford Bridge."

Di Matteo took over as interim coach in March, when Andre Villas-Boas was sacked.

He was given the role permanently in June, on a two-year contract.