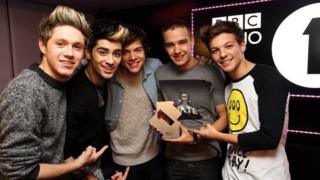 One Direction have two little things to celebrate this week - they've topped the albums chart and the singles chart at the same time!

Little Things is their second number one single in the UK and Take Me Home is their first album to hit the top spot.

The lads beat Bruno Mars and Little Mix to the top of the singles chart.

Mars' Locked Out of Heaven charted at number two, with Little Mix's DNA at three.

Ed Sheeran, who wrote One Direction's Little Things, saw his single Give Me Love reaching number 18 in this week's chart.

Robbie Williams, who topped both charts last week, slipped to number five in the album chart, and out of the top five singles rundown.