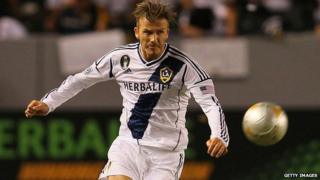 The Football Federation of Australia has confirmed that early discussions have been held with Becks' management about a possible move down-under.

Ex-England captain Becks, now 37, is currently contracted to MLS side LA Galaxy in the United States.

The midfielder signed a new two year deal with the club in January, but could be available on loan within a fortnight when the MLS season ends.

Other famous names that have made the move to Oz include Alessandro Del Piero, capped over 90 times by Italy and ex-England and Aston Villa striker Emile Heskey, who's already scored 5 goals in 6 games.