Secrets of the world's leggiest creature are revealed

Now this story definitely has legs - and lots of them!

The secrets of a record-breaking millipede with 750 legs have been revealed. Until recently, it had mythical status because it had not been seen since 1926.

The illacme plenipes millipede lives underground and has uses it many legs for clinging to the rocks it lives on.

The females have up to 750 legs but the males have fewer, usually about 520 legs.

The most common type of millipede have about 62 legs, so this type is much leggier than usual. 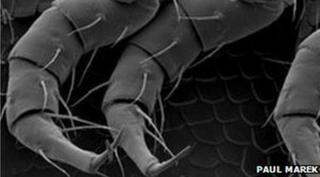 Although the word millipede literally means 'thousand legs', so far none have been found with that many.

The largest type of millipede is the giant African millipede, they can grow up to 28cm (11 in).

Millipedes have two pairs of legs on most of the segments on their bodies but centipedes only have one pair per segment.

Now, Centipede means 'hundred legs' but only some of them have that many, some have up to 400 but others have fewer than 20.

Centipedes always have an uneven number of legs on each side of their bodies, for example 17 pairs (34 in total) instead of 16 (32).

This means they could never actually have exactly 100 legs.