Clashes between Israelis and Palestinians in Gaza 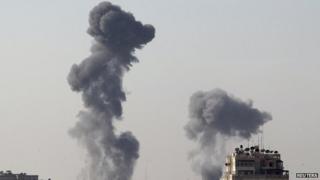 There have been violent clashes between Israel and Palestinian militants in Gaza.

There's been growing tension in the region over the past few days as rockets were fired from Gaza into Israel.

The United Nations called an emergency meeting overnight to discuss the problems in the region.