Steven Gerrard is set to win his 100th cap for England against Sweden on Wednesday, with his Liverpool team-mate Raheem Sterling in the side too.

Gerrard would be only the sixth player to play 100 times for his country.

Other legends to have got that magic century before him are Billy Wright, Bobby Charlton, Bobby Moore, Peter Shilton and David Beckham.

In his 99 matches so far in an England shirt, the midfielder's scored 19 goals with 19 assists.

Also likely to play is 17-year-old winger Raheem Sterling, who'd become the fifth-youngest ever to play for England if he comes on in Stockholm.

Tottenham's Steven Caulker and Leon Osman of Everton are also set for their international debuts in Wednesday's friendly international. 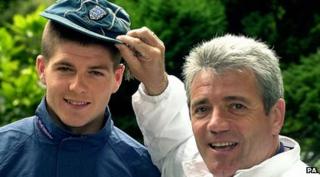