The new hands-free computer that straps on to your head 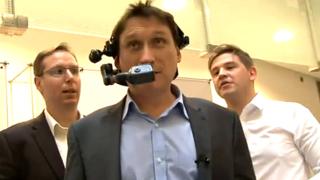 Imagine a computer that isn't a rectangular box like the PC on your desk or the smart phone in your pocket.

It doesn't have a touchscreen, a mouse or a keyboard.

Instead you wear it on your head and tell it what to do using voice commands.

It's one of a number of wearable computers being developed.

It sounds futuristic but it's real and will go on sale in the new year. 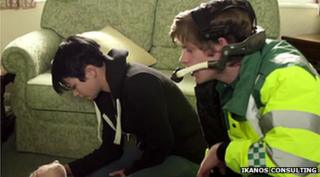 The HC1 from Motorola Solutions looks a bit like a cross between an overgrown telephone headset and a cycle helmet.

The screen is mounted on an arm and is held in front of your face.

Using voice commands, the user can order the device to open files, check emails or zoom in with the camera to look in closer detail at what's in front of them.

It could be used for people who need to keep their hands free for other tasks, like paramedics.

"If you imagine somebody up, say, a telegraph pole at the very top, needing to rewire something, they don't really want to be fiddling with a laptop.

"They can get all the information they need and do the job safely with this device."

Visions of the future

It's not the first wearable computer: Google have been developing Project Glass which is a bit like a pair of glasses with a tiny computer screen built-in.

In the future people may interact with computers in new ways by wearing them rather than putting them on a desk or in a pocket, and by waving or talking to them instead of touching a screen or pointing with a mouse.