Woman made to wear 'idiot' sign as punishment for bad driving 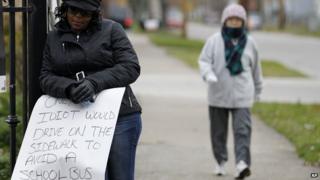 A woman in America has been made to wear an 'idiot' sign as a punishment for dangerous driving.

Shena Hardin from Cleveland was caught overtaking a school bus by driving on the pavement.

The sign read: "Only an idiot would drive on the sidewalk to avoid a school bus."

Witnesses say she used to drive on the pavement a lot to avoid waiting for the school bus as it stopped to pick up and drop off children.

That's why a judge in Ohio came up with this unusual punishment to make her embarrassed about what she did.

She was filmed on a mobile phone by someone on the school bus.