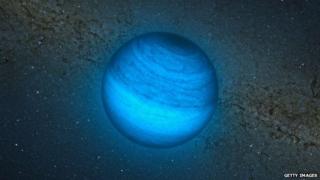 The closest rogue planet to Earth has been spotted by astronomers.

Rogue planets are ones that drift in space without a parent star that they orbit around.

It's the closest one to Earth that's been found - but it's still 100 light years away from us. That's a long way!

They guess its temperature is 400C (much, much hotter than it gets on Earth).

Rogue planets are thought to form in two possible ways: either similarly to other planets, but then get flung out of their star's orbit; or form in a similar way to stars but never getting quite as big as a star.