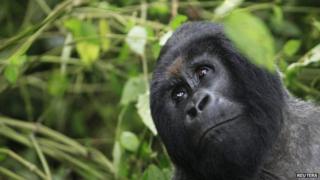 A survey of mountain gorillas has revealed their numbers have gone over the last ten years.

The animals only live in two areas of East Africa.

The Uganda Wildlife Authority has found the numbers have increased.

Mountain gorillas are under threat from loss of habitat, disease and getting caught in hunting traps.

"This is largely due to intensive conservation efforts and successful community engagement."