What annoys you at the cinema? 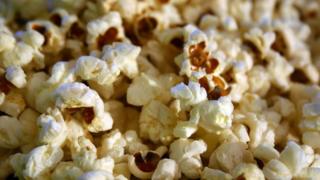 You're in your seat, the lights are going down - and the big movie you've been looking forward to for ages is about to begin. The excitement builds, the tension mounts - and then someone starts nattering right behind you. Annoying, right?

Cinema goers are being told what not to do when they go to see a film in a new manners guide.

The main thing that annoys people at the cinema is others talking when the film is on. Rustling sweets, slurping drinks and using your mobile phone are all frowned upon.

Other big no-nos according to the guide are taking your shoes off, sitting in someone else's seat and arriving late.

We asked you what you think: what really annoys you when you head out to the cinema with your friends or family?

"I hate the cinema because of all the noises of popcorn!"

"The thing that annoys me most in the cinema is when you sit down ready to watch the movie and BOOM, a human giraffe sits right in front of you and you can no longer see the film."

"All the adverts at the beginning annoy me! I sit down and my popcorn's all gone before the film starts!

"I hate it when you go to the cinema and someone starts to talk really loud or you hear someone saying what is going to happen!"

"Well once I was sitting with my dad and then I saw these boys flashing a red light at the screen and moving it about, it was so annoying that I nearly went and told them to stop it."

"My mum and I both agree that people who sit in front of you and kiss a lot during the film is pretty annoying, also when we really want to watch a film and there are no subtitles I can't invite my mum due to the fact that she is deaf."

"The thing that annoys me the most would have to be people crying, screaming and laughing so loudly that you can barely hear the movie!"

"What really annoys me is when people get up and squeeze past you in the middle of the movie."

"I don't like it when you're trying to watch the film and people talk really loud!!!"

"It really annoys me when people play games or go on a social networking site. I was once in the cinema and a man in front of me was on Facebook and playing on a game! Why pay to watch a film if you're not going to watch it?"

"What annoys me is my brother laughing really loud!"

"I hate it when people are constantly getting up and down and squeezing past in front of you."

"I hate it when people put their smelly cheesy feet on my seat, it really irritates me!!!"

"I especially don't like it when people are opening their bags of sweets and slurping on their drinks and you can't hear what the people are saying!"

"Whenever you go to the cinema, you always get people either behind or in front of you talking or playing on their mobiles. Annoying or what?!"

"What annoys me the most in the cinema or theatre is that people bring crisps in and crunch on them really loudly, doesn't that annoy you?"

"I remember seeing a film and a little boy starting talking behind me. Furthermore, he started kicking the back of my seat! It was really annoying; I even had to turn round and say, "Stop!""

"Our class think the following things are really annoying:

"What annoys me is people's heads in the screen and people on their mobile phones."

"I hate it when people are chattering while the movie is going on."