A doctor is to run seven ultra marathons, on seven different continents, in seven days to raise money for charity.

An ultra marathon is any race longer than the traditional distance of just over 26 miles.

Andrew Murray was hired by the Scottish government to highlight the importance of physical activity.

His challenge will take him to Antarctica, Patagonia, Atlanta, London, Egypt, Dubai and Australia.

He hopes people will walk run or cycle 5km each day he is away. He'll be running 50 km (about 31 miles) every day. 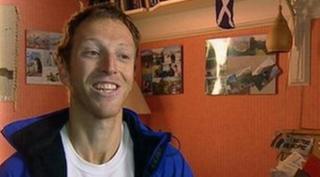 Dr Murray hopes people will walk, run or cycle 5km each day he is away

'Being active is the best thing for your health'

The GP, who will begin his attempt on 23 November, said:

"The most important thing is to raise awareness of the benefits of exercise - being active regularly is the single best thing for your health."