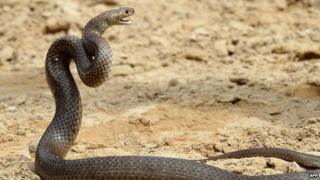 Schoolkids had to climb through a classroom window to escape from a snake, according to reports in Australian newspapers.

The young pupils at a nursery school in Brisbane had just had lunch and were lying down for a nap when one of their teachers screamed "Snake!".

The reports say a deadly eastern brown snake was slithering in between the beds.

The teachers woke the children and helped them escape through a window.

After the children were safe in their school playground a snake catcher was called.

The most venomous in the world is the inland Taipan snake which is also found in Australia.

The venom from one bite is enough to kill 100 fully grown men.

The eastern brown snake is considered to be the second most venomous snake in the world.

It's not the only scary snake that lives in and around Brisbane. The area's known for being home to some of the world's most venomous snakes.

Speaking to Australian newspapers, the school's headteacher said the children had stayed calm throughout the ordeal and knew what to do.

Many schools in Australia have a "snake plan", and pupils practise what to do if they ever spot a snake in class.

After a nervous few days back in school, the headteacher Mr Fowler said everything had now returned to normal.