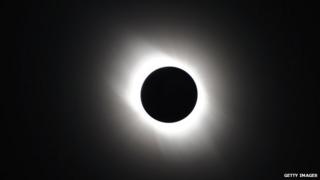 A rare event in the sky, called a solar eclipse, is expected over northern Australia on Wednesday 14 November.

It happens when the Moon sits between the Earth and the Sun, plunging parts of the world into complete darkness.

The best place to see it will be Queensland, which will see a total eclipse.

That means people there will be able to see the Sun completely covered by the Moon for just over two minutes, which is extremely rare.

But other places like New Zealand and eastern Indonesia will be able to see a partial eclipse too.

You need a clear day to see it, so tens of thousands of people gathering in Australia are hoping for good weather.

Some animals can sometimes behave in strange ways during a solar eclipse.

Experts say birds can fall asleep, because when it goes dark, they think it's night time!

Scientists will also be using underwater cameras at the Great Barrier Reef to capture sea creatures' reactions to the strange event.