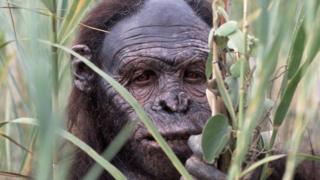 This is what experts think early humans looked like, more than 3 million years ago.

Before now, it was thought our ancestors preferred hard nuts and seeds because of their big grinding teeth and powerful jaw muscles.

But after studying fossils of their teeth, scientists have found traces of tropical grasses.

They say humans could have switched from eating nuts and berries to grass when they stopped living in trees.

It means our earliest relations could have had a diet like modern-day savannah baboons, which also feed on African grassland.