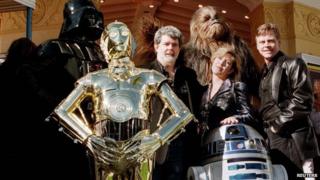 The next film in the Star Wars series will be written by top Hollywood scriptwriter Michael Arndt.

He's famous for writing Disney movie Toy Story 3, which was nominated for an Oscar for best adapted screenplay in 2010.

He also co-wrote the second film in the Hunger Games trilogy.

Star Wars: Episode 7 will focus on a new generation of heroes but there could be appearances from actors who were part of the original films.

The first Star Wars film was released in 1977 and the series quickly became a worldwide success.

To date, there have been six Star Wars films.

In October, it was announced that Disney had bought Star Wars creator George Lucas's film company and were planning a further three films.