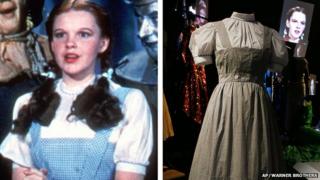 The buyer of the blue and white gingham dress hasn't been named.

The auctioneers at the event in Beverley Hills said the price paid was what they had expected.

Judy Garland's dress was not the only highlight of the two-day Hollywood Icons auction.

Meanwhile, $1,375 (£865) was paid each for a slice of wedding cake from both Prince William and Kate Middleton's wedding and 1981 wedding of Prince Charles and Princess Diana.