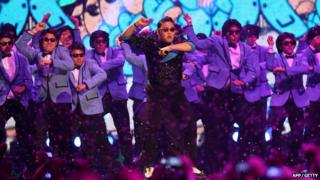 Other winners included Taylor Swift and Justin Bieber who each scooped three awards.

One Direction won in two categories, Best New Act and Biggest Fans, but weren't able to attend the show.

Picking up the Best Look award for the most stylish act, Taylor Swift said: "I am so excited I can't believe you gave me three awards."

The MTV Europe Awards are held each year in a different European city. This year's event took place in Frankfurt, Germany.

The show always features loads of live performances with Rita Ora, No Doubt, Carly Rae Jepson and The Killers among this year's acts.

Trapeze acts and fire dancers joined the artists on stage to give the night a circus theme.

There was also a tribute to American singer Whitney Houston who died earlier this year.