Scientists warn pandas are under threat from climate change 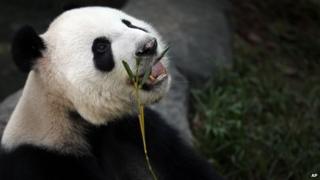 Giant pandas are under threat from climate change, scientists are warning.

A new study's found that rising temperatures could wipe out much of the bamboo that the bears need for food - and that could happen by the end of the century.

The animals are already endangered. It's thought there are fewer than 1,600 left in the wild, mainly in the mountain forests of western China.

Experts are calling for action to protect the giant panda habitats.

Bamboo makes up almost all of the giant panda's diet. The bears eat up to 38 kilograms (84 pounds) of the plant per day.

Scientist are worried that several types of bamboo could disappear completely as temperatures rise.

It's thought that half of the world's bamboo species are already under threat due to people clearing land.

The researchers from the USA and China say: "The pandas may face a shortage of food unless they can find alternative food resources."

They have published their findings in science magazine Nature Climate Change, saying a plan needs to be put in place to help the pandas survive.