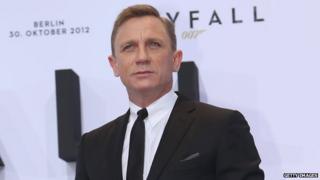 Daniel Craig's latest adventure has made £57 million from ticket sales in less than two weeks!

Up until now, the Batman movie Dark Knight Rises had been the top flick of the year.

Bond producer Barbara Broccoli said: "We are thrilled and proud to reach this box office landmark in record time and are delighted that UK audiences continue to enjoy Skyfall."

Skyfall is the 23rd James Bond movie in the 50-year franchise.