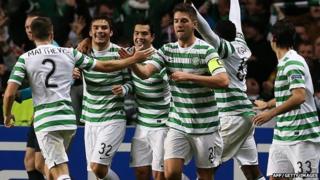 SPL champions Celtic have stunned Barcelona after beating them 2-1 in the Champions League on Wednesday night.

The Scottish side took the lead at Celtic Park after 21 minutes thanks to Victor Wanyama. Then Tony Watt came off the bench to net one in the final 10 minutes.

Lionel Messi scored for Barca in injury time, but it wasn't enough.

Celtic now lie second in their group with seven points and could make the knockout stage for the first time ever.

Manager Neil Lennon said: "We've just beaten the best team in the world. It's one of the proudest nights of my career, it was a monumental achievement from the players."

Elsewhere, Manchester United came from behind in Portugal to beat Braga 3-1.

They're now through to the last 16.