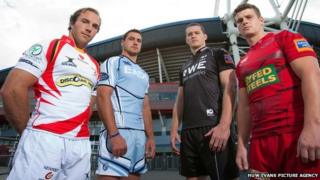 A new report into Wales' rugby regions has said some of them may not survive their money troubles.

The finances of Newport Gwent Dragons, Cardiff Blues, the Ospreys and Scarlets were checked over by accountants PriceWaterhouseCoopers.

The report says that the regions cannot afford to carry on the way they are and criticised their bad management.

It also comes up with a solution to protect the future of the four regions.

Rugby in Wales went from being club-based to the current regional system in 2003, to improve finance in the sport and the standard of players.

Five Welsh regions were formed at first, until Celtic Warriors went bust leaving the remaining four who compete in European competitions like the Pro12 tournament and the LV= Cup.

Since then most of the players who helped Wales win Six Nations Grand Slams in 2005, 2008 and 2012 have come from the four regions.

But their finances are not doing well.

The report says the best option is for the Welsh Rugby Union to work more closely with the regions, with more collaboration between the two.

This could be put into action quickly, it says, and would keep the individual identities of the regions safe.

The regions will to meet to talk about the report in the next few days.