Wild salmon being killed by sea lice in Europe 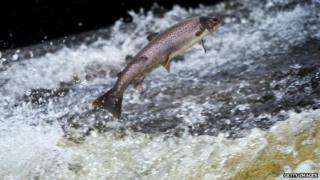 Lots of wild salmon are being killed by sea lice in Europe every year, according to a new international study.

They looked at why fish didn't survive and found that nearly 40% of deaths were caused by sea lice, which are natural parasites.

Up to 95% of salmon can die during their ocean migration, the researchers said.

Professor Martin Krkosek, who led the study, said: "Usually we think of food, climate, predators and fishing... but we have learned that parasites are taking a very large share of the catch."

Salmon farmers have been trying to control the sea lice by introducing "cleaner" fish called ballan wrasse, which feed on the pests.