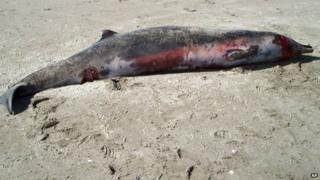 The world's rarest whale has been identified - two years after two of them washed up in New Zealand.

An adult female spade-toothed beaked whale and her calf were found beached in 2010, but they were mistaken for a more common type of whale and buried.

When tests were done about six months later on samples taken from the mammals, they showed they were actually the rare spade-toothed beaked kind.

The whales are so rare that nobody has ever seen one alive.

This year scientists returned to dig out the skeletons of the two whales, so they could study them.

It wasn't an easy task and they found the mother's skull had been washed out to sea.

Previously, only skull fragments have been discovered and that's only happened three times.

The spade-toothed beaked whale gets its name because males have wide, blade-like, tusk teeth.

Both males and females have beaks which make them look like dolphins.

Not much is known about the whales, except that they live in the South Pacific Ocean and eat mainly squid.