Asteroid belts could help us to find alien life 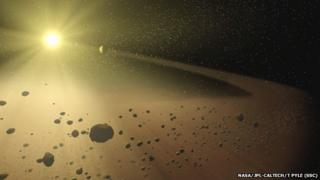 Looking for asteroid belts could be the key to finding alien life, according to a new study.

It's long been thought that asteroids, pieces of rock floating in space, could wipe out life if they smashed into a planet like Earth.

Our asteroid belt is located between Mars and Jupiter, the biggest planet in our Solar System.

The massive pull of gravity from Jupiter helped create the belt, because it stopped the bits of rock from coming together and forming planets.

The research has been done by Nasa fellow Rebecca Martin and astronomer Mario Livo.