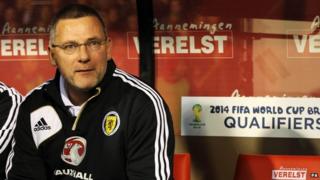 The manager of Scotland's national team has been sacked, following their less than impressive performance in the 2014 World Cup qualifiers.

The hunt is now on for a replacement for Craig Levein.

Under-21 coach Billy Stark has been put in charge temporarily.

Craig Levein had said he would quit after the qualifying campaign, but the Scottish Football Association decided to replace him immediately.

They confirmed he'd been removed from his post on Monday night "due to the disappointing results."