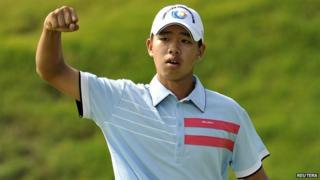 A 14-year-old schoolboy from China is set to become the youngest ever golfer to play at the US Masters.

Guan Tianlang qualified for next April's tournament by winning the Asia-Pacific Amateur Championship in Thailand on Sunday.

He said: "I don't know what's going to happen there but I know I just want to do well."

If Guan does play, he'll beat the record set in 2010 by Italy's Matteo Manassero, who was 16 when he competed. 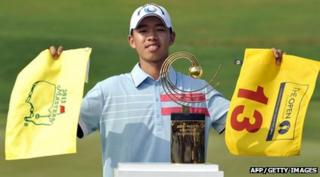 Guan started playing the sport when he was just four, heading to the golf course with his parents.

His favourite golfer is Tiger Woods, who also started young and won the Masters competition at the age of 21.