Robbie Williams back at number 1 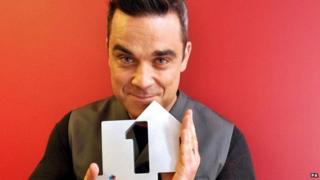 He reached the top of the chart with Candy, which sold more than 130,000 copies last week.

The Official Charts Company says that makes it the fastest-selling single by a male artist this year.

This is Robbie's seventh solo number one and his 14th number one in total including hits he's had with his band Take That.

It brings him level with his bandmate Gary Barlow, who co-wrote the current hit.

Robbie said he was "chuffed" to have reached "the top spot".