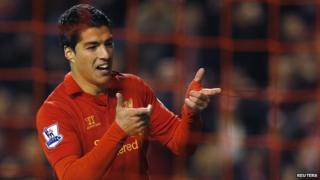 Liverpool drew 1-1 with Newcastle on Sunday after a goal by Luis Suarez that was so good, Brendan Rodgers has described him as Liverpool's Lionel Messi.

The Reds had been behind with Yohan Cabaye scoring first for Newcastle just before half time.

Suarez was then able to equalise with a superb strike in the second half.

It was the Uruguayan's seventh goal in the league this season

Liverpool boss Rodgers was so pleased with his performance he said: "Suarez's goal was brilliant...he is a world-class striker."

"He plays the false nine role like Messi does at Barcelona."

The draw saw Liverpool's fifth league game in a row without defeat - their longest unbeaten run in 2012.

They are still stuggling to come out on top though, having only won three of their last 15 Premier League matches at Anfield.