One Direction to sing for the Queen 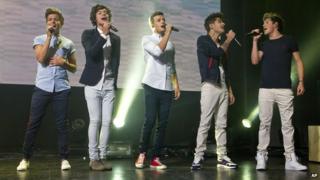 One Direction are set to perform for the Queen at this year's Royal Variety Performance.

The boy band are joining popstars Girls Aloud, Robbie Williams, Alicia Keys and Kylie Minogue in the line up.

This year will be the 100th time the Royal Variety Performance has taken place and will be hosted by comedian David Walliams.

The Queen and her husband, the Duke of Edinburgh, will be there to watch the acts.

The boys are planning to perform their new single called Little Things, which was written by Ed Sheeran.

It's taking place at the Royal Albert Hall in London on 19 November and will be shown on TV in December.