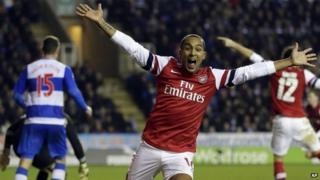 Arsenal are through to the third round of the League Cup after a dramatic 7-5 win over Reading.

It was epic, it was incredible and it will go down as one of the most amazing comebacks in history.

Reading were leading 4-0 after only 40 minutes but collapsed in the second half.

The Gunners drew level after 90 minutes and progressed to the quarter-finals in extra time.

Reading started the match like champions and led 4-0 through Jason Roberts, an own goal by Laurent Koscielny and strikes from Mikele Leigertwood and Noel Hunt.

The Arsenal fans were getting upset and were chanting for their money back. 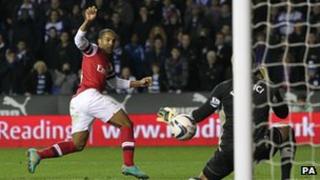 But then the comeback started.

Theo Walcott scored just before the break and Olivier Giroud and Koscielny gave Arsenal hope in the second half to make it 4-3.

And then in injury time Walcott completed the remarkable comeback scoring an equaliser.

At 4-4 the game was sent into extra time.

Liverpool trail 3-0 at half-time but score three times in six minutes to turn the game on its head. The Reds went on to win on penalties.

Spurs find themselves 3-0 ahead before Joey Barton is sent off. Ten-man City fight back and John Macken scores a late winner.

Arsenal thought they'd won it when Marouane Chamakh put them 5-4 up - but the drama was far from over.

Reading substitute Pavel Pogrebnyak headed the ball past the Arsenal goalkeeper and it was all square at 5-5.

The fans were on the edge of their seats, the managers were looking nervous and the game was heading towards a penalty shoot-out.

But Theo Walcott had other ideas. He smashed home his third and Arsenal's sixth in the 120th minute and put the Gunners back in front.

Reading tried to pull one back but Chamakh completed the famous comeback lobbing the Reading keeper with one of the last kicks of the game.

The referee blew his whistle and the amazing twelve-goal thriller came to an end.

Man of the match: Theo Walcott