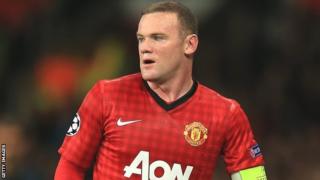 Wayne Rooney is the only British player on Fifa's shortlist for the Ballon d'Or, the prize for the best footballer of 2012.

The Man United striker is joined on the list by team-mate Rob Van Persie and Premier League rivals like Sergio Aguero, Yaya Toure and Mario Balotelli.

Barcelona's super-striker Lionel Messi and Real Madrid star Cristiano Ronaldo are the favourites for the award, which will be handed out at a special ceremony in January.

What is the Ballon d'Or?

The Ballon d'Or is one of the oldest and most famous prizes in football. It's voted for by international captains and head coaches, as well as the media.

Only a handful of British players have ever won the award with Michael Owen, in 2001, being the most recent.

There is also an award for the best coach. Rooney's boss Sir Alex Ferguson, along with Chelsea's Champions League winning manager Roberto Di Matteo are both shortlisted. Madrid boss Jose Mourinho and Spain coach Vicente Del Bosque are also in the running.

The shortlists for best player and coach will be narrowed down to three names on 29 November.