Super-storm Sandy has devastated parts of America's east coast, in what US President Barack Obama has declared a "major disaster".

At least 15 people have been killed after the storm struck causing severe flooding, fires and leaving at least six million homes and business without power.

One million people have been ordered to leave their homes, and an estimated 50 million are thought to be affected. 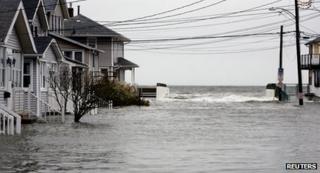 A power sub-station in New York City exploded after water flooded into the generators and a hospital needed to be evacuated after a power cut.

In other parts of the US, the storm has brought heavy snow and severe flooding.

New Jersey state Governor Chris Christie said the devastation was "beyond anything I thought I'd ever see."