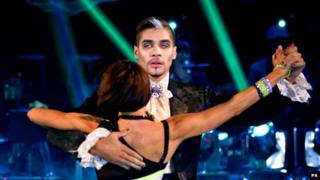 Strictly star Louis Smith is in trouble for revealing who was voted off the show, hours before the public found out.

The former gymnast tweeted on Saturday night that he was sad to see Eastender Sid Owen leave, a full day before the results show announced Sid was out of the competition.

The results show is recorded on Saturday night, straight after the live performances, but not shown on TV until Sunday.

Despite his loose lips, it was still a pretty good night for Louis.

The Olympic silver medallist and his partner Flavia Cacace tangoed their way to the top of the leaderboard with a score of 35.