Ex-Dr Who boss Russell T Davies on Wizards vs Aliens

He told Newsround: "Harry Potter's always there casting spells, fighting for good things, but he never faces up against robots or laser beams." 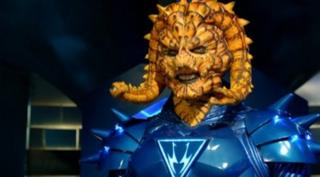 Davies called Wizards vs Aliens a meeting of two different worlds: "There's fantasy and science fiction. There's magic and science. So we thought, 'What will happen if we shove the two of them together?'"

Hayley also got the top writer's verdict on some of osome of your alien designs!

And his view on extraterrestrial life? "I think we all wish that aliens were real... I wish they'd land peacefully. I hope they don't go and invade and attack us all."

Well, we certainly hope the scary Nekross aliens don't come and get us!

Wizards vs Aliens starts on the CBBC Channel on Monday 29 October at 5:15pm.