Ash dieback: What is the disease and why is it threatening UK trees? 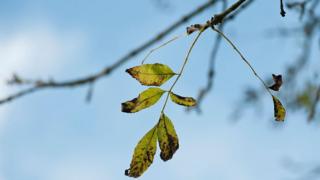 Scientists say there is hope that some ash forests will be able to survive a devastating tree disease called ash dieback.

Previous surveys found almost all ash trees could be wiped out.

But recent studies from around Europe show that ash dieback killed as high as 70% of ash trees in woodlands and 85% in plantations.

The disease has swept across Europe over the past 20 years, causing widespread damage to woodlands. In many cases the fungus will eventually kill infected plants.

Do you agree these are the UK's best trees?

Would you like to go to a nature school?

The researchers pulled together surveys of ash dieback across Europe, including England, Ukraine, Scandinavia and the Baltic States. They found that even in forests that had been exposed to the disease for 20 years, not all trees were lost.

"Although the numbers seem grim, the percentage of trees that are still alive is encouraging from a long-term perspective," said Prof Richard Buggs, of Royal Botanic Gardens Kew and Queen Mary University of London.

What is Ash Dieback? 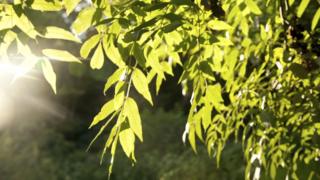 It was recorded for the first time in the UK in October 2012.

Ash dieback does not affect humans but it does have a devastating impact on ash trees, one of the most popular species in the country.

It's caused by a fungus called Chalara fraxinea which kills the trees leaves and crown, or outer edge. In worst cases, it can lead to the tree completely dying.

It can affect a wide range of ash trees, including those in forests and cities, and even young trees in nurseries.

It's thought 'ash dieback' can be spread by infected wood moving around to different places. 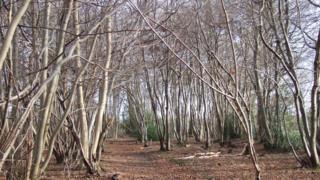 Other possible ways of the tree infection spreading include rain 'splashing' the disease spores from one tree to the next, and insects transporting the disease.

'Ash dieback' has been found across much of mainland Europe. In Denmark, it's infected 90% of ash trees.

The full impact of ash dieback in the UK will not become clear until 2022.

Ash dieback disease spreads to trees in Kent and Essex