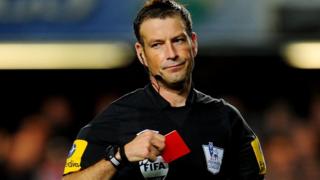 Police are to investigate comments allegedly made by Premier League referee Mark Clattenburg during Sunday's match between Chelsea and Man United.

Chelsea made a complaint to the Football Association after their 3-2 loss to United, accusing Clattenburg of using "inappropriate language" towards two of their players.

However, someone else has now made a complaint to police, triggering their investigation.

It has been claimed that Clattenburg used racial language during the top-of-the-table clash.

The Professional Game Match Officials (PGMO), who represent referees, released a statement saying: "Mark will co-operate fully and welcomes the opportunity for the facts to be established."

The FA have also confirmed that the official will not referee any Premier League games next weekend.