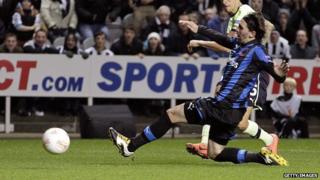 It was a good night for English clubs in the Europa League qualifiers, with Newcastle and Liverpool now both at the top of their groups.

Newcastle are looking good to reach the knockout stages after a comfortable 1-0 win over Belgian side Club Bruges.

Gabriel Obertan scored the only goal of the game early in the second half.

The Magpies are now three points clear at the top of Group D.

They are one of only two teams (with Leverkusen) not to have conceded a goal in this season's Europa League group stage so far.

Newcastle manager Alan Pardew said it was a "big win" for the team against a tough side.

Liverpool are also top of their qualifying group after hosting the super-rich Russian side Anzhi Makhachkala at Anfield.

A rare strike from Stewart Downing secured a 1-0 victory for the Reds.

No win last night for Tottenham though who were held to their third straight draw in Europe by Slovenian side N-K Maribor.

They went a goal down in the first half, but an equaliser on the hour from Gilfy Siger-son made sure Spurs picked up a point.

They're sitting third in their group and may struggle to go further.