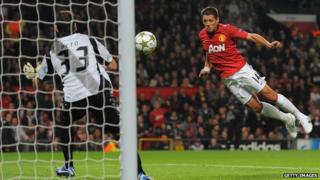 Amazing result for Manchester United in the Champions League.

The team managed to come back from being two goals down against Braga.

Brazilian striker Alan scored inside the first 90 seconds, and made it 2-0 after just twenty minutes.

But Javier Hernandez led the fight back for United with two goals himself, heading in the winner just fifteen minutes before the end.

It's three wins out of three for them.

Alex Teixeira scored early on for Shaktar Donetsk, who went 2-0 ahead with a goal from Fernandinho just after half time.

Oscar scored a consolation goal for Chelsea just before the final whistle but the 2-1 result puts the defending champions second in their group.

And it was heartbreak for Celtic - they looked like they might sneak a point, with a terrific display away to the mighty Barcelona.

It was not to be though as Jordi Alba hit the winner for the Spanish side in the dying seconds.