Mum on strike, what would you do? 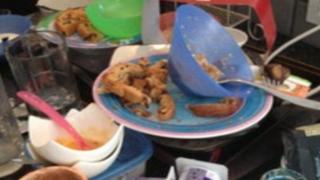 Mess left after Canadian mum stopped cleaning up after her kids.

A mum in Canada went on strike and refused to clean up after her children. We want to know what you do if it your parents went on strike?

What kind of things do your parents do for you that you would miss if they stopped doing it?

Could you cope on your own?

Do you help out around the house or do you rely on your parents to pick up after you?

You told us what you thought...

"If my mum did that, I would clean it for her because I think it is not for them to clean up everything we do."

"If my mum went on strike I would like to think that I could show her why we need her to do things for us. I would help her and show her how much we love her."

"We would not have any food if dad couldn't cook and the washing up would not be done. So to all the mums: please don't go on strike."

"It would be great because mum can't moan and say she's tired and she needs rest. It would be me, and I can be the boss of the house."

"I think I would survive for two weeks but then I would probably plead to her until she stops."

"If my mother was on strike I would go on strike too and not clean my bedroom or do my chores until she stops her strike."

"If my mum went on strike I would be quite glad because she would stop moaning all the time about having to tidy up after me, but I wouldn't be able to cope without her. She's amazing and does so much for my family and me."

"If my mum went on strike, the house would look like a bomb had exploded in it. I would be in charge but exhausted. Thank you mum for looking after me so well!"

"I wouldn't be able to cope for long, maybe two days at the most. My mum does practically everything, she's amazing!"

"If my parents went on strike the house would be a mess and my bedroom would be as messy as a bin!"

"I probably wouldn't cope because I don't do much cleaning up. I live the easy life."

"I think I would only cope for three days because I'm very lazy so I would get tired from cleaning up all day."

"If my mum went on strike I don't know what I'd do! She is amazing, she cleans up after my sister, my brother and me. She also makes us really lovely meals. The house would be a mess within five minutes!"

"I think I would cope okay but it would probably get hard after a bit. I do try to help at home though."

"I think I could last a day, but after that I think my house would be a mess!"

"If my mum went on strike I would clean up the whole house, cook and I would even look after my younger sisters and brother because I am the older sister in the house."

"I would not be able to cope without my mum! She is a absolute star and she does all the washing but I help cooking tea sometimes. I think i could maybe last for a week but my brother wouldn't last 5 minutes!"

"If my mum went on strike then I would enlist the help of my two sisters, my brother and my numerous cousins to get everything done. Surely that many children can clean up quicker than one woman."

"If my mum went on strike the house would be too messy to live in and it would be very hard to grow up properly. I do help my mum around the house but I would struggle to do it on my own. Poor children in Canada!"

"I would go on strike too, or if that wouldn't work then I would just plead with her."

"I probably couldn't cope. At first I guess it would be fun because I could get whatever I want but after a while I'll get tired of doing the most simple jobs. I also won't be able to cook a good warm meal, only microwave food and maybe some oven food."

I think I could last a day, but after that I think my house would be a mess.