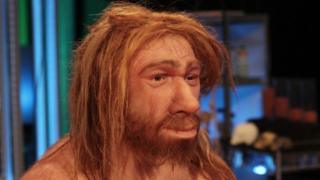 Scientists have used an ancient skeleton to make a model of what a Neanderthal man would look like.

The remains of an adult male were discovered in France in excavations at La Ferrassie cave in the Dordogne in 1909.

The bones have helped scientists create a detailed reconstruction of our closest prehistoric relative.

The discovery of his leg and foot bones showed that Neanderthals walked upright which was not known before.

The scientists looked at the bones and teeth to find out how tall he was and what he might have eaten.

The process was shown on the BBC Two programme Prehistoric Autopsy.

Neanderthals are ancient relatives but are not direct ancestors of modern humans.

We now know that Neanderthals were stocky with strong arms and hands, and that they had large skulls - longer and lower than ours - with sloping foreheads and no chin.

•Travelled to Europe and Asia where they evolved into Neanderthals