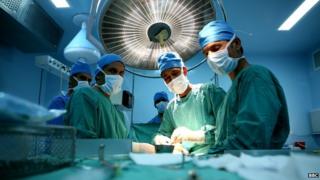 The surgery was performed on Natalie Jones, 25, who had a hole in her heart.

Instruments are inserted by tiny cuts between the ribs and moved within the chest using an external panel controlled by doctors.

The robot has a miniature camera attached to it, giving surgeons a 3D, high-definition view of the heart.

Because the cuts are smaller than normal surgery patients recover quicker with fewer scars and they are less likely to get infections.