UK has 'weirdest' year of weather ever 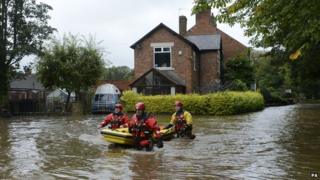 From the driest spring in over 100 years to the wettest April to June on record, you could say that the weather in the UK has been a bit odd recently.

Well according to a group of experts the weather in the UK over the last few months has actually been the "weirdest" ever on record.

Scientists from three organisations have been keeping an eye on the weather here.

They think it's a pattern we might have to get used to.

Paul Mustow, head of flood management for the Environment Agency said: "We have to get our heads round the possibility now that we're going to have to move very quickly from drought to flood."

Experts from the Environment Agency, the Met Office and the Centre for Ecology & Hydrology say the UK needs to put better plans in place for the future.